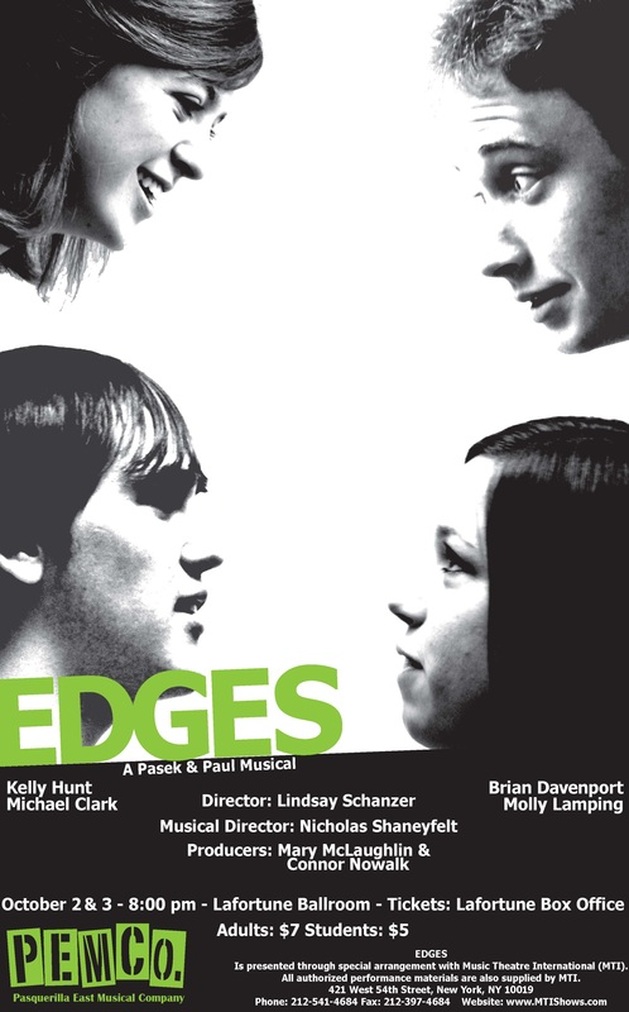 First and foremost, we'd like to thank you for your interest in and attendance of PEMCo's very first fall production. "Edges" represents a unique chance for our program to diversify its musical theatre repertoire. This show is unlike any PEMCo has done before—it's a cross between the big musical you see in Washington Hall and the Musical Revue you see here in the ballroom. We are thrilled to bridge the gap!

"Edges" was conceived by duo Benj Pasek and Justin Paul, recent graduates of the esteemed Musical Theatre program at the University of Michigan, in their sophomore year of college. Pasek & Paul, as they are commonly known, have been dubbed "the next Jason Robert Brown" in the musical theatre world. Contemporary in nature, the writing of both JRB and Pasek & Paul provides a new direction for musical theatre that is often generalized as "too traditional."

We came to know "Edges" in a fortunate turn of events: last winter, Lindsay had the privilege of both meeting and singing for Benj at a musical theatre workshop in New York. Not only did she get to hear the phenomenal story of their arrival on the scene, but was fortunate enough to keep in close contact with Benj over the year. Benj sent an email last May encouraging us to take a look at "Edges" and consider producing it here at Notre Dame. He mentioned a recent revamp of the show and wanted us to be among the first to present the new material. Lindsay enthusiastically accepted the offer, and now we're here to share it with you.

"Edges" is a song cycle about the lessons we learn as we come of age. Whether it regards relationships, self-reflection, or hopes and dreams, these lessons are relevant and speak especially well to those of us who are, in fact, coming of age. The show has no central plot—rather, the intention is to offer a window into the life of the everyman. Each piece of the show is reflective of an issue or event we've experienced or will likely face at some point down the road. While they share a common denominator, not all of the pieces are meant to be connected. Benj and Justin gave us everything they have written for this show—multiple versions, alternate lyrics, and additional songs—and the freedom to build it however we wished. Similarly, we leave the interpretation of "Edges" largely up to you.

As with any show, we have multiple people to thank for their dedication and energy. We have to thank our producers, Connor and Mary, whose significant contribution got this inaugural fall show rolling. We have been motivated and supported by the enthusiasm of all PEMCo members, past and present, here and abroad. We are grateful to Benj and Justin for providing us with fresh material, in which every song is full of vitality and youth. Most of all, we are indebted to our amazingly talented and remarkably efficient cast. The effort they have put into this show is a testament to their talent and work ethic. Rehearsals started just three weeks ago, and they have been on top of their game since day one. Fifteen wordy songs and seventeen days later, we are proud to present "Edges."

Thanks again for your attendance. Enjoy the show!

The Pasquerilla East Musical Company is back for the 2008 season with "Edges," a revue-style production written by two graduates of the University of Michigan, Benj Pasek and Justin Paul. "Edges" marks a new venture for PEMCo, as their mainstage productions are schedule to stage in the spring semester of each academic year. Â With the addition of a fall show, the students participating in PEMCo are helping to expand the arts scene at Notre Dame and Saint Mary's.
"We had a number of reasons for choosing to add a fall show to our season," Connor Nowalk, a senior producers, said in an e-mail to the Observer. "Primarily we, as a company, feel strongly about the promotion of the arts, both in general and here at Notre Dame. By providing more opportunities for performers and audience members alike, we hope to both contribute to and shape the arts scene at Notre Dame."
For those new to the ND-SMC arts landscape, PEMCo is a musical theater company that was originally founded in 1997 by Pasquerilla East resident Kelly McGann. "[McGann] organized a group of friends to perform 'Joseph and the Amazing Technicolor Dreamcoat,' using a children's chorus from the South Bend Area," Nowalk said. "Interestingly enough, some of those children go [to Notre Dame] now and have performed in PEMCo shows since."
Since that first performance of "Joseph," the company has expanded its scope and its repertoire. Recent shows have included "Ragtime," the company's 2007 mainstage production, and "Kiss Me, Kate," the mainstage show performed in February of this year. For Mary McLaughlin, a fellow senior producer, "Ragtime" was an especially memorable experience. "There was a lot of controversy surrounding the show, given some of the content," McLaughlin said in an e-mail to the Observer. Â "We ended up holding an academic forum, where we invited several prominent African American professors and mentors to join a panel and speak about some of these issues on campus."
McLaughlin cites the forum and the show together as signs of the effect that the arts can have in campus communities. "It brought our cast very close together, and I think we really made an impact on a lot of people on campus."
This year's mainstage show will be "The Producers," one of the largest undertakings in PEMCo history. The rights to the popular Mel Brooks hit were only released recently, and, "This is one of the funniest, most popular Broadway musicals ever written," Nowalk said. "We are so thrilled to be able to perform it as our mainstage show this February. We have a lot of talent - especially young talent - and an extremely knowledgeable production staff, so this is not going to be a show you are going to want to miss." "Edges," the latest addition to the PEMCo schedule, marks a departure for the company in some ways. "Bringing in a show like 'Edges' opens up the market for a style of musical theater which has been little performed at Notre Dame," Nowalk said. "Smaller, more intimate musicals have only recently become popular." Â Nowalk cites the differences between a typical mainstage show, which is a much larger production, and a show like "Edges" as a chance to engage with a different kind of theater. "Because of the size and style of the main stage show â€¦ we didn't really have an opportunity to tap into this new genre. Â We hope that through 'Edges' and future fall shows, we will be able to expose theater lovers to this wonderful new realm in the musical theater world."
McLaughlin cites the strength of the PEMCo team, particularly director Lindsay Schanzer and musical director Nicholas Shaneyfelt, as key to the strength of "Edges" as a production. "I can't say enough about Lindsay and Nicholas. Â Nicholas has been such a valuable member of PEMCo over the years, with his incredible musical gift, and Lindsay, only a sophomore, has already made such a tremendous mark on the company, both with her onstage talent and her gift as a director."
It was Schanzer, McLaughlin mentions, who first approached the PEMCo team about "Edges" last year. [Schanzer] came to us with this idea last year as a freshman, and we're really happy to see her take leadership in PEMCo."