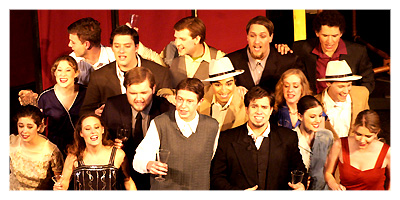 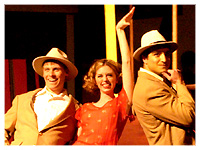 Recently, whenever I see people I know, I have this conversation:

After performing in the PEMCo musical for the past three years, I still feel strange about sitting with you in the audience tonight. It’s the best kind of strange though, because like you, I know I am about to experience something great. And the best part is, I have experienced so much already.

I have had four years to work, joke, learn, love and live with this company (read: community). Every year, the dynamic of the group shifts and evolves to fit each new show. For the past four and a half months, this particular group has been breath to me and to my vision of what this musical can achieve. I can think of nothing more satisfying than to watch hours of preparation and rehearsal come to fruition, to see these incredible people make something beautiful, and to be moved, as I hope you will be moved, by this show.

Grand Hotel: the Musical is one of the most interesting musicals I’ve encountered – and believe me, I’ve read synopses of almost all of them. This is a musical drama. It will inspire you to think about life, about relationships, to wonder at how a brief encounter with another person could change you so much. Or, so little.

My brief encounters with members of PEMCo (past and present) have given me so much fuel for life. Erin, you are my BFF, and the other ¾ of my brain. I can’t wait for Chapter Three. Tom M, you are wise beyond your years, and you never cease to amaze me. I’m so glad to know you’re a part of PEMCo (past, present and future). Katrina, you have always come through when I needed you. I hope you have already burned that conflict sheet. Matty and Tanth – you are rock stars. You made this happen. Thank you.

Finally: Mom and Dad, you’ve given me every kind of support I could possibly need since birth, actually. I thank you especially for believing in me. I love you.

Now, please allow the cast and crew to share with you a glimpse of the comings and goings of the most expensive hotel in Europe in 1928: Grand Hotel, Berlin.

And life goes on,

Grand Hotel: The Musical is no ordinary musical. The depth of this play delves into deep-seated issues in history such as economics, politics, anti-Semitism, drugs, sexism, and the most indiscernible, elusive issue of them all, love. So what has this play to offer to you as a member of our audience? Entertainment.

For the past several months, the show you see before you has been carefully crafted together. We have spent innumerable hours ardently piecing together the following two hours. I can thus say without a shadow of a doubt that we are very proud of our product. Each member of our production has been called to fulfill a role and has done so with zealous passion. So as you enjoy the catchy music of the show, I challenge you to stay attuned to the deeper issues that this play intrinsically calls forth.

We do not claim to doctor these issues, nor do we leave them baron without resolve. Each issue merely gru from its innate place in the script. So before you go rhona-way to your friends to rave about our show (or if you so choose to sandor not for the final ovation), I do importune you to see our production as a glance into serious issues and to frie-da entertainment value from its place of innate importance.

Personally, I would like to thank you for your literal audience tonight and invite you to appreciate and enjoy the product we so happily offer you. For it is with my utmost pleasure to inform you that not a sole member of our production will take tonight for grand-ed.

The world of Grand Hotel: the Musical Berlin, to me, is an incredibly exciting one of high rollers, loneliness, passion, pretty girls, oppression, ambition, and hot jazz. It is a world in which anything is possible. I love the music in this show, and it is my hope that the choreography is able to not only showcase issues discussed in Grand Hotel: the Musical, but also heighten them to the level of this opulent, dream-like world in which the characters live, if only temporarily.

Our production of Grand Hotel: the Musical was lucky enough to land not only the most talented group of actors, dancers, and singers around, but the most hardworking and fun-loving as well. A unique quality that had made this experience so fantastic is that in one moment of rehearsal we could be all laughing hysterically and then pull it in right away, refocus, and do great work. I think above all, that is what will cause this project to succeed. It allows people to be creative, to take risks and to have lots of input. I am very proud of what you are about to see, and even more so because it has been a truly collaborative process. I believe that is how the best art is made.

I am honored to be presenting Grand Hotel: the Musical to you tonight as a labor of love and a culmination of many people’s hard work and dedication to an organization that has, I think most of us would agree, done more for us over the last few years than we could ever give back to it. It has been my honor and privilege to work with this group of people for the last five months and to be a part of team “Grand Hotel”. Devon, I do not have to thank you because you already know what I would say, as we share the same brain. Tommy, please keep talking. Matty, Tanth, and Katrina thank you for being so wonderful and supportive. Huge thanks to Mel and Joe, my Captain and Lieutenant, who have helped me more than they can imagine. Finally, I really just want to thank this remarkably juicy cast for sharing their gifts with me and making rehearsal a joy, even when they make fun of my choice of warm-up music and the way I say Bo-ler-o. I am so proud of you. You sweep a lady off her feet.

The Pasquerilla East Musical Company's musical is a highlight of the winter months every year. This group of student performers, one of the best known on campus, never fails to put on a sharp and entertaining show. While "Grand Hotel" is no exception to that rule, it is a departure from past performances in other ways. Few of the Company's musicals feature such a balance between a wide variety of major characters, and the focus on dance in this year's performance is perhaps a first for the group.

Director Devon Candura and choreographer Erin Porvaznik chose the play partly to find a good mix of required talents. "We wanted a play that had challenging dancing and challenging acting," Candura said. "The plays that fit that were few and far between." Candura also wanted something a little different and a little more obscure than the average musical. "I was looking for something that didn't end in a double wedding," she said. "Being a less well-known show was really attractive to me the year after 'West Side Story.'"

"Grand Hotel," one of the few plays to fit the bill, takes the Company to the most expensive hotel in 1920's Berlin. The play takes place in the era of the Charleston, the speakeasy and the stock market bubble. Anti-Semitic sentiment is beginning to emerge around Germany, America still represents a dream of opportunity and jazz is beginning to steal the spotlight from ballet as a popular pastime.

The audience looks in on the events that change characters' lives within a single day at the Grand Hotel. Nobility, artists, workers and the seedier members of society all make their way through, provided they have money to pay or a skill to sell. The threads of love, death and money underlie almost every scene. A dissatisfied group of menial laborers mutters Marxist rhetoric around the edges of the action while the elite strive to hang onto the money, and the status, to which they are accustomed. A woman in red, representing love, periodically flirts with death, a man dressed in black. A death bolero between the two marks the climax of the action.

Of the six largest roles it would be impossible to pick out a single lead. The action is well divided among a fading ballerina and her devoted assistant, a young typist aspiring to a better future, a young bookkeeper determined to see a little bit of life, a corrupt businessman and a nearly bankrupt baron. An old, cynical doctor watches the action and offers his own observations on life and the people who get caught up in it directly to the audience.

It would be equally impossible to pick out a best performer. The cast members all work together well, a key element between such closely interwoven characters. Allison Giovinazzo, a sophomore, who like many of the lead actors played a small part in last year's production, is endearing as the young and naïve Flaemmchen, dreaming of Hollywood but worried about a pregnancy. Senior Tom Anthony, a long-time campus theater veteran, is thoroughly sleazy as businessman Preysing. "I'm detestable," Anthony said. "It was a little daunting at first because it's very gross, but I sort of got into it eventually." Senior Brian Grundy, one of two electrical engineers in the cast, found his role to be a good break from his normal studies. "It's a very fun role," Grundy said. "I basically just wear a tuxedo and hit on women all the time. It couldn't be better." Sophomore Brad Lancy, who plays the doctor, found his first role as someone over 50 to be a challenge. "I would say that I am a symbol of the Great Depression to come, and overall depression and sorrow," Lancy said. "I bring out all the flaws and all the good things and bad things in people's lives." The death bolero is a fascinating central point for the play. Juniors Jen Belliveau, who has danced for 17 years but never in a Notre Dame production, and Joe Garlock, who had never danced before joining the Swing Club at Notre Dame, worked together on Sunday nights to learn the complicated dance.

Sophomore Tom Mucchetti was responsible for much of the final production in his roles as both musical director and technical director. In addition to working with musicians and conducting the orchestra, Mucchetti supervised set construction. "Musical directing has been a very rewarding experience for me," Mucchetti said. "In my role as technical director, it's been an enjoyable process to see the transformation of a conceptual grandness into something tangible."

The Company as a whole both gains and suffers from choosing a relatively obscure musical to work with. Few have heard of "Grand Hotel" even among theater aficionados, and the musical does not contain any of the often performed crowd-pleasing favorites that appeared in last year's performance of "West Side Story." However, this keeps the spectators on their toes. The ending is not a foregone conclusion, and the audience does not drift off due to overly familiar scenes. Perhaps not least, performing a little-known work saves the performers from wondering whether they are being compared to actors and singers whom the audience members have previously seen in the roles.

As in most years, the tickets for the musical have long since been sold. But if you can get your hands on them, the performance is well worth your time.

"Grand Hotel" will be performed tonight through Saturday at Washington Hall.