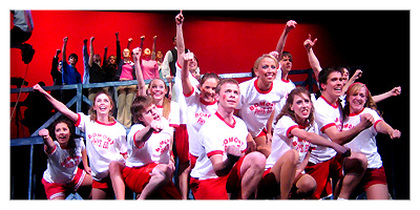 Four years ago this month, I was in my first PEMCo production, Into the Woods, directed by Lizzie Bracken, who I thought was the coolest person I had ever seen. There was another freshman who had gotten a part in the show, and her name was Natalie Martinez. The two of us were "forest nymphs," which essentially meant that we dressed in earth-toned rags and silently pranced around creating all kinds of mischief onstage. So began four years of involvement in PEMCo, and my friendship with Natalie was only the beginning in terms of what this company has given me.

Four years later, I am the director. This is hard for me to believe because I can't even hold a candle to Lizzie in the coolness department. It's true - I wore the same flannel shirt to the majority of rehearsals and I just used the phrase "coolness department." See? I'm not that cool. But this cast has listened to me since day one, respected the staff, respected each other, and trusted in themselves. The result is a stellar piece of musical theatre of which I am so proud.

Footloose will surprise you. It's more than high school fluff. It's bigger than Kevin Bacon (if that's possible). It addresses death, loss, denial, and oppresion. It challenges us to confront the past, though it might be painful. It teaches us that it's okay if things aren't perfect all the time. It proves that dancing is not a crime.

My title as director is laughable because what i did was only a small piece of a very large puzzle. Special thanks to Beth and Joe, who worked so hard to make sure we actually had a show. Beth, without you, not only would this show never have happened, but I would probably be dead. Thanks also to Amy Geist, who went above and beyond to harbor our anxieties and help us get this off the ground. Steve and Theresa, thanks for your amazing work on the set. Thanks to Mom, Dad, Mary Kate, Maggie, Grace, Adam, Beth G., and Anne for being both my friends and family. To Tom, my maestro, thank you for your professionalism and your invaluable insight. And to Natty, my codirector, my fellow forest nymph, my friend: Thank you for your commitment and partnership since day one. This was really fun.

To the cast: THANK YOU for your hard work, professionalism, and dedication. It is now time to enjoy the fruit of your labors. Congratulations.

And to the audience: Natalie's incredible choreography, paired up with some of your favorite 80's hits, will probably want to make you get up and dance. If it happens, don't resist the urge. PEMCo encourages freedom of expression. Just please make sure you're not blocking the view of others behind you and kindly move to the aisles.

A musical about a town that forbids dancing seems like the perfect candidate for a production outside the realm of musical theatre. If the recurring theme of the show is that there is no dancing, then surely this show is not known for its dancing component, especially in comparison to the other two branches of the undoubtedly triadic musical. But no. This show epitomizes dance. For more information on this, read Natalie's note.

The music: I can honestly say that in the past couple of years in my role as musical director, I have seen a steady progression of talent, dedication, and zeal. This year's cast brought these attitudes to a new level. I truly feel honored to work with a group that performs at such a consistently high level. I am proud to say the musical theatre talent that PEMCo corrals each year has reached its paramount peak this year, and I feel privileged to work with these gifted individuals.

In addition, I am honored to work with such great musicians in the pit band, over half of whom major in music. Their willingness to work towards excellence is yet another PEMCo principle to come fully to fruition.

So I challenge you, reader, to take it all in. Notice the precision of the detailed dances, the symbiotic synthesis of the pit, the carefully crafted light design, the masterfully made and designed set, the deeply developed characterizations, the tight-knit harmonies hammered out, the obvious organizational acumen behind the scenes, and the punctilious painting of makeup and costumes, but most of all, reader, observe the joy this cast, crew, and pit radiate while performing for you. We love every minute of it, and we hope that you do too.

Two years ago, on a dark night in May, a small group of musical theatre enhusiasts sat studying diligently at Hesburgh Library. Much to their surprise a tall, dark, and handsome young man slammed his book shut, stood up in distress, and belted out the familiar tune, "Been workin' so hard..." As the theme song of Footloose filled the library, the students abandoned their desks and found themselves signing and dancing in perfect unison, "Everybody Cut Footloose!" Perhaps this story seems unbelievable, but I can assure you that it is almost entirely true. When they heard the lively music of Footloose, the students simply couldn't stand still.

My guess is that as you experience the energy of Footloose tonight, you will have, like those musical theatre enthusiasts in Hesburgh Library, the inescapable urge to dance. Go ahead and give in. Perhaps you will just tap your foot or nod your head to the beat, but I am willing to bet that in the next two hours there will be at least a moment when you too are dancing.

I cannot possibly recount all the hours in the last few months poured into making this show a reality, but I can say with absolute certainty that it has been a complete delight. There is something spectacular about creating a show with such a dynamic cast and brilliant crew, particularly when they happen to be among your closest friends. Jenny, we shared our first yawn on this stage, and now we share this little breath of creativity. I cannot express the honor it is to have worked with such a talented actress, energetic director, and incredible friend. Tom, you are the Music Man - literally the source of my inspiration. Beth, I don't know how you do it, but somehow you do it all. Joe, this position is ideal. And finally, to the "Moo-tinez" clan, thanks for all those road trip sing-alongs, and kitchen dance parties. Watch carefully; you might just recognize a few of our favorite moves.

I couldn't be more thrilled to share with you now Footloose. The show we present tonight, we give with full heart. We have treasured it for months, always looking forward to this moment when we would relive with you the sometimes ridiculous, lighthearded splendor of High School. Sit back if you like, but don't get too comfortable, we will have you dancing in no time!

The Pasquerilla East Musical Company (PEMCo.) performed "Footloose" on Thursday, Friday and Saturday night at Washington Hall. Based on the 1980s film starring Kevin Bacon, the musical entertained the crowd with strong performances and an upbeat sensibility.

"Footloose" tells the story of Ren McCormack (Will McAuliffe), a Chicago native who is forced to move to the small town of Boman with his mother Ethel (Kathleen Sullivan) after his father leaves. Under the influence of the strict Reverend Shaw Moore (Joseph Garlock), the town has a number of strict rules in place, including a ban on dancing within the city limits. Ren, along with the Reverend's rebellious daughter Ariel (Callie Hoffman) and the rest of his classmates, fights the rules to prove he is more than just the town troublemaker.

"I wanted to do something really upbeat, funny and with lots of dancing," director Jenny Radelet said. "I was also drawn to the fact that it's fairly modern and has all those great songs from the '80s. Plus we thought since 'Footloose' was a pretty popular movie, the name would draw a big audience."

In an interesting twist on standard musicals, "Footloose" blends pop songs from the 1980s with original music. While the original compositions aren't as immediately recognizable as songs from more famous musicals, all of the songs are decently entertaining. Some, such as the rollicking "Mama Says (You Can't Back Down)" and "I'm Free/Heaven Help Me" are better than others, but all of the songs are peppy and upbeat, much like the musical itself.

The musical includes '80s pop songs including "Almost Paradise," "Let's Hear It For the Boy" and "Holding Out for a Hero." The musical does a good job of integrating the songs without feeling too forced. While these songs do make the musical a definite sing-along crowd-pleaser, they can make it seem a little bit cheesy and can be distracting at times because they are so recognizable and the original songs are not.

One of the best parts of "Footloose," much like the movie upon which it is based, is the dancing.

"For a choreographer, 'Footloose' is a dream show," said senior Natalie Martinez, the show's choreographer. The show includes everything from Temptations-style diva numbers to country line dancing."

Coupled with the generally upbeat music, the dance numbers were high-energy, athletic events. They ranged from the expected "Footloose" style of dancing to a great line dancing scene, and even included a dance set during gym class.

The performers pulled off the clearly intense routines with apparent ease, and they were all well-choreographed in spite of the diverse range of styles.

The dancing seemed different from what you get in most musicals, which was one of the definite strengths of the performance.

"The music of Footloose doesn't lend itself to your typical musical theatre choreography," Martinez said. "It's the type of music you blare on the radio or dance to at a party. As the choreographer, my goal was to keep the dancing spontaneous and fun while at the same time challenging and impressive."

PEMCo's cast was definitely the most impressive part of the performance of "Footloose." The energy of the cast proved absolutely infectious, and every scene was clearly the result of a lot of practice and a deep love of performing.

While the whole cast truly does a great job, there were some significant standouts in the performance. Will McAuliffe, as Ren, was a solid leading man with great dancing and singing skills, and he was complimented by Callie Hoffman's powerful voice and presence as Ariel.

Joseph Garlock, who played the antagonistic Reverend Moore, was not only a convincing adult, but he brought emotional depth to the otherwise simple story.

Ariel's trio of friends, including Rusty (Regan Harding), Urleen (Andrea Laidman) and Wendy Jo (Pam Williams), were terrific performers and provided some of the best comic moments in the musical.

Jack Calcutt played the hilarious over-the-top country character of Willard Hewitt and provided some of the night's biggest laughs.

"There's a moment during the first refrain of "Let's Hear It For the Boy" when Jack gets this goofy, amazing smile on his face after feeling the rhythm for the first time," Radelet said. "Every single time it happens, I die laughing and just thank God for musical theatre."

Overall, PEMCo. put on a fantastic show with what is an entertaining, albeit somewhat cheesy, musical. The energy of the show, the great singing and dancing and the exuberance of the cast made it a performance worth watching.